A Goshawk  Accipiter gentilis population in the province of Antwerp, Belgium

Goshawks; what are these birds up to?

Goshawks in Belgium are resident; they are quite capable to survive four seasons in the same region.  My study area is a military training site (1570 hectares), the “Groot Schietveld” with a lively raptor population.  Goshawk females are the queens of the wood; they can catch any of the mammal and bird species present.  In winter, when less food is available, the Goshawks are elusive and you will not easily see or hear them.  How different is their behaviour by the time the days lengthen and the sun gets warmer.  Their advertising calls are heard throughout the wood and on sunny days they perform their flight display.  Now comes the time when the females have to get into condition; the males must bring in food.  The lady sits on a branch and lets herself be heard with loud begging calls. 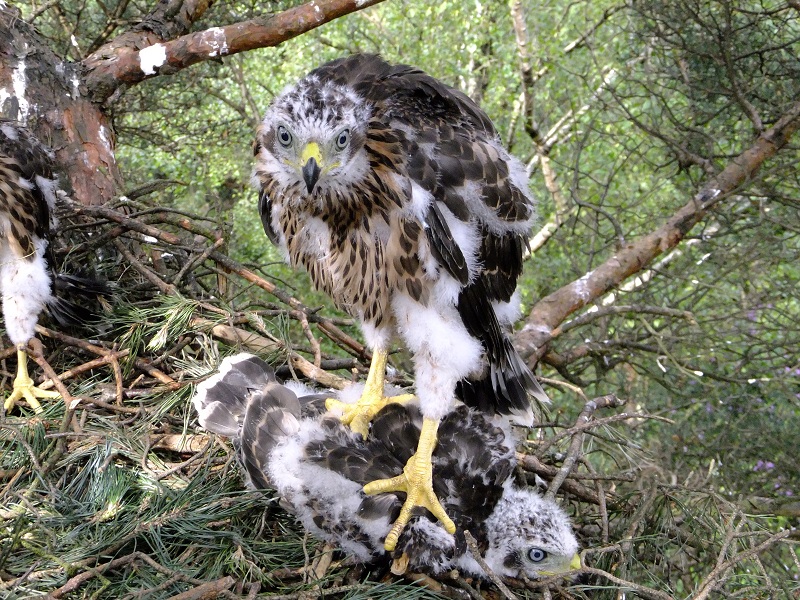 A nest of four well-fed young Goshawks. The nest contained four young but, judging from the photograph, it seems to provide insufficient room for the growing chicks! "Get off my back you big bully" PHOTO: Herman Nuytemans
One of my interests in this study concerns their diet.  Twelve years ago I found a predated Little Grebe, it was one of a pair that I noted the day before on my list for a bird census.  How did the predator catch this waterbird?  My interest was roused and from then on I looked more and more down to the forest floor and less up to the trees.  The search for prey remains has given me knowledge on eating habits and the diet of the raptors in the area.  The list contains nearly 1500 prey items of which one third concern racing pigeons.  The remainder of the list show approximately 65 bird species and small mammals.  Small passerines are not so easy to find, so larger birds and the ones with striking colours are over represented on the prey list.

In the study area Goshawks and Common Buzzards occupy approximately 9-12 territories each.  As their ranges overlap, the predator cannot always be identified.  However, about 50% of the prey items that were found can be allocated to Goshawks.  The leftovers can be recognized from the typical method of plucking; Goshawks remove the head first, then open the breast and take some flesh, tear off the tail feathers, fly to another spot nearby and remove the feathers of one wing, pick up the cadaver and finish plucking on a third or fourth spot.  A typical find of a Goshawk prey is bones and feathers scattered over different locations.  Another help with determination is excrement at the picking location; Goshawks make longer white stripes than Sparrowhawks.   The photograph below shows the remains of a juvenile Buzzard, consumed by a Goshawk in July. 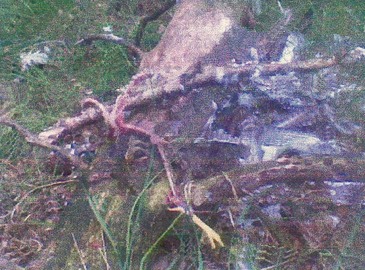 Remains of a young Buzzard that had strayed into the Goshawk's territory. Notice how the bones have been plucked completely clean.
Some Goshawks are genuine specialists in catching species.  In one of the territories a winter roost of Corvidae is present.  In this area I have found in total 40 Crows and Jackdaws.  Another range lies close to an urbanization and, not surprisingly, a significant number of Collared Doves and Magpies were found.  On top of that, a Blue-and-Yellow Macaw, the most exotic prey on the list, was also found.  Gulls are not very common on the list but notably last year two were found, a Mediterranean and a Common Gull in and around the same nest.  Interesting are the Woodcocks, they showed up for the first time in April 2008.  Their beautiful tail feathers were found on the floorbed with brown leaves but, thanks to the striking white tips, this prey was identified.  In the following years another eight Woodcocks were found; it tells you something about their presence.  The weirdest findings were during spring migration and one in June 2010, the year Woodcocks also appeared on the breeding list.  Not all Woodcocks are caught by Goshawks, on one occasion a feather was found in a Buzzard nest. 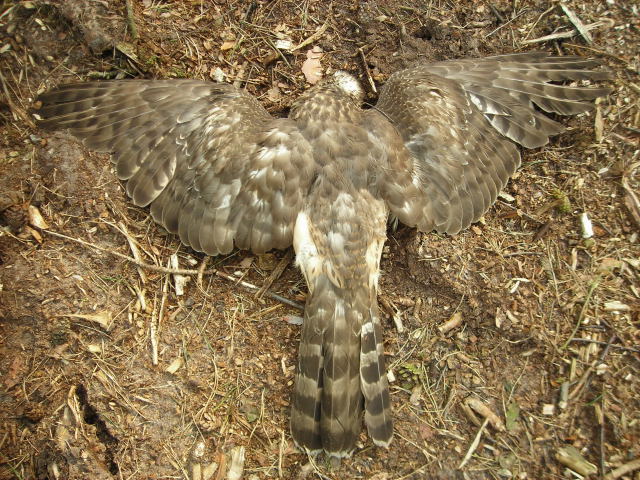 When in early April the females start their egg laying they also begin to moult their primaries.  The moulted feathers that can be found on the woodfloor are gathered as it helps to identify the age of the birds.  In the feather collection you can see that a quick turnover is taking place on the East side of the domain.  In many years, 1-2 year olds replaced the previous females.  The reason resident birds disappear is most probably persecution.  Evidence in the form of poison and bullets were found.  Not only older birds disappear, young birds and chicks are also victims.  The photograph shows a 1- year old female.  The cadaver was sent to a laboratory and poison was found in her crop.  It would appear justified to point fingers at the adjacent hunting area and its hunters.

During May the most common prey is the racing pigeon.  The Goshawks have 3-4 young to feed now and it is at this time that many stray racing pigeons show up in the area.  Approximately 500 pigeons were identified on the basis of rings and stamped feathers.  It makes one curious to know where the pigeons came from, how old they were, etcetera.  Most pigeons are juveniles and probably out on a practice flight or their first race.  Also, many pigeons are astray from their home area, met bad weather, joined the wrong bunch and ended their race in a raptor territory.  A lost pigeon is an easy prey; they are tired and often disorientated.  Most pigeons found are from Belgian fanciers but some foreign birds do appear on the list.  Notably a bird from Kirkby near Liverpool where the latter’s owner told me that the bird was liberated in Messac, France 690 km from Kirkby, and probably “missed the Channel”; it has happened before.  The furthest recovery on the list was from a loft 800 km north in Denmark.  His owners were two young brothers; champions in the Danish Association (not with this bird though!).

Goshawk behaviour, survival, moult and prey are interesting topics. You need patience, endurance, time and energy for study and collection - but it will give you tremendous enjoyment.
Marieke Berkvens
March 2012