This site incorporates both the original "Birding Axarquia" and the recently developed Photo Album sites.  As such, the site includes the latest Birding News, especially from the Axarquia area of Spain and a Photos Album, ordered by species, illustrating many of the local birds. 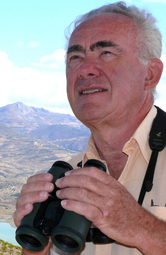 Bob Wright lives with his wife, Jenny on the mountain top of El Tinao overlooking Torre del Mar and the sea to the south and Lake Vinuela and the mountains to the north.  The surrounding hills are alive with birds throughout the year; Autumn through Spring sees the resident Kestrels, Thekla Larks, Stonechats, Blue Rock Thrushes,  Sardinian Warblers, Serins and Goldfinches joined by visiting White Wagtails and Chiffchaffs whilst Summer brings Bee-eaters, Swifts (including some Pallid Swifts), both Barn and Red-rumped Swallows and, of course, our magnificent Short-toed Eagles.  Whilst mainly quiet for the Spring migration, Autumn usually brings large movements of raptors; mainly Griffon Vultures and Honey Buzzards but also smaller numbers of Booted Eagles and Black Kites.

In addition to general birding topics, photographs, photographs taken by the Axarquia Birder have been included.  I trust the site will gradually update (and improve!) over the coming months as the long process of uploading photographs is undertaken.  The idea is to try and include as many species as possible and, as I take an improved shot, gradually replace the originals over time.

For the moment, many of the original photographs were taken with a Panasonic FZ50 using (but very occasionally not) a 1.7 tele-conversion lens.  However, from late 2009 onwards, most shots have been taken using a Canon EOS D50 complete with Canon 100-400 5.6 IS USM lens.  This lens is a lot heavier than the canon 5.6 prime lens, so apologies in advance as, in these early days, I adjust to the additional weight.

Unless otherwise stated, the photographs displayed on "Photos of the Month" (Page 2) were all taken with the Canon D50 using either the f5.6 100-400 IS lens or the f5.6 400 prime lens.  Indeed, this prime lens is more likely to have been used for pictures after 2011.

An account of the regular visits to neighbouring sites in both the Axarquia and local birding venues, such as the old river at the Guadalhorce in Malaga, the old railway track above the Ventas de Zafarray, the small pool (pantaneta) at Alhama de Granada, the woods at El Robledal and the Charca de Suarez Reserve and neighbouring marshes in Motril, is published on the Birding Axarquia blog which can be accessed directly from Page 6.

I trust that you enjoy the site and do please contact me by email (see below) to offer any helpful comments for the site's future development and improvement.